In Romania the highway code does not distinguish between cars and motorcycles. As a result, a motorcycle must carry a fire extinguisher, a first aid kit and two reflective triangles.

Until recently, the police ignored these provisions and did not impose fines on motorcycle and moped owners. This has changed and the motorcycle community has been outraged by several cases in which fines have been imposed for the lack of the extinguisher and the set of reflective triangles. However, the law is clear and requires the presence of these elements, which makes the fines given by the police to be correct from the perspective of law enforcement. So, it is up to the traffic police to decide whether or not to enforce the law. 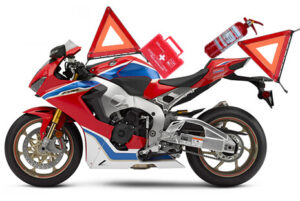 Almost 8,000 signatures were collected in 7 days by the online petition initiated by MotoADN, the Romanian motorcyclists’ association – and a member of FEMA – to eliminate the obligation to carry a fire extinguisher, reflective triangles and a medical kit on motorcycles and mopeds.

There are technical and road safety arguments to remove the extinguisher and reflective triangles:

First Aid Kit – In the event of an accident with personal injury, the motorcyclist’s protective equipment causes minor injuries, such as scratches, cuts, to appear only in combination with other more serious problems, which require the intervention of a rescue service. The medical kit is thus useless or can even be dangerous if used by non-specialized personnel in such situations.

Răzvan Pavel, president of MotoADN, says: “We believe that this provision is a legislative loophole that needs to be remedied. Through this petition we wanted to make the voice of the Romanian motorcycle community heard, because the message must go further. We therefore request the Romanian Parliament, the Ministry of Transport and the Ministry of Interior to exclude motorcycles and mopeds from the application of the provisions of Article 8 of the Emergency Ordinance no. 195/2002 on traffic on public roads.”