ECE 22 helmet stickers: what they mean

The ECE regulation #22 applies to motorcycle helmets licensed to be sold as road-legal on European roads. The regulation establishes the ‘uniform provisions concerning the approval of protective helmets and their visors for drivers and passengers of motor cycles and mopeds’. The regulation is in its fifth revision. That is why it is now most frequently referred to as ‘ECE 22.05’.

Regulation ECE 22 requires every motorcycle helmet to bear a sticker sewn into or onto the retention system (aka: ‘the chinstrap’). This sticker shows the homologation mark, the homologation number, and the production serial number. These are the most important features.

The homologation mark is shown in a circle: The uppercase ‘E’ followed by a number identifies the country that tested for and granted the homologation. For example: E3 is the mark found on helmets approved in Italy. It is important to note that E-mark approval is a financial question, so a helmet manufacturer varies approval institutions and countries depending on cost, and there is no link between the approval country and the manufacturing country. As long as the approval institution can grant an E-mark approval, the helmet is road-legal throughout Europe (the EEA countries that have subscribed to the regulations) plus over 20 non-European countries that have also adopted the regulation.

Below the E-mark there are two numbers: the left number is the homologation number, where the first two digits stand for the ‘amendment’ under which the helmet model has been approved (05 represents the fifth amendment to regulation #22); the right number is the production serial number of the item. For the visor it is a little simpler and it is enough to only show embossed on the visor the E-mark and the homologation number.

Some ‘flip-front’ helmets are both ‘J’ and ‘P’ approved, meaning they are tested under the rules of both the ‘jet’ and the fully ‘protective’ type approvals. What it means to you is that those (and only those) flip-front helmets can be ridden with either the chin piece raised up or the chin piece lowered and locked in position. 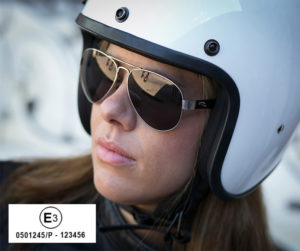 Courtesy of Inspired by Get Geared