Skip to content
You are here
Home > Library > Mobility test 2019

Powered two-wheelers: the best way to travel to work.

Volunteers from FEMA members and FMI repeated the European Mobility Test that was done in 2014 and 2017. This year the mobility test was held in 6 countries and 10 cities.

With cars, motorcycles, mopeds, speed-pedelecs, e-bikes, conventional bicycles and public transport a route from a place outside a city to an office inside the city was followed. The tests were performed between May and September 2019 during the morning rush hour.

Already over 70% of the European citizens live in urban areas and the number is expected to increase to over 80% in the next decades. This means that congestion, parking problems and air quality will be a growing problem in the future. Many commuters still prefer to travel in their cars and spend much time in traffic jams and looking for parking spaces. Public transport, walking and cycling are promoted by the European Union, national governments and local councils as the preferable alternative. This is mostly a result of the environmental effects of cars, especially cars that run on diesel fuel, in the cities. The effects of a switch from car to other modes of transport on the time the commuter will lose or gain with, it is never part of the discussion.

In almost every test, the powered two-wheeler came first, except in Nantes, where the motorcycle came second to the bicycle. 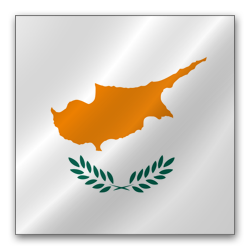 Cyprus – The test took place on a 15.2 kilometers coastal road of Limassol, Cyprus and involved a scooter, a motorbike, a car, a bus and a bicycle. There was regular traffic. The participants started from the same area and of course they had to go to the same destination. They had a common meeting/stop point and they were always within the speed limit. The start was simultaneous and was given to everyone with the start of the timer and with an sms. Participants were filming the entire route, and three more members controlled and guided the test and also videotaped and photographed the effort. The results were measured electronically. 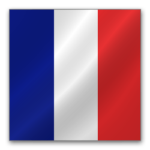 France – In France five teams from FFMC participated in the test.

Cannes – FFMC 06 organised a mobility comparative test Thursday June 27th morning between Cannet Rocheville (the ‘dormitory’ suburbs of Cannes) and Sophia Antipolis on a 9 km course. The different vehicles are: a motorcycle (MT 07), a maxi-scooter (400 cm3), an electric-assisted bicycle, a car (Fiat Panda) and a pedestrian using public transports. Departure at 08.15h. Traffic was moderately congested (heat wave/work/end of school)? 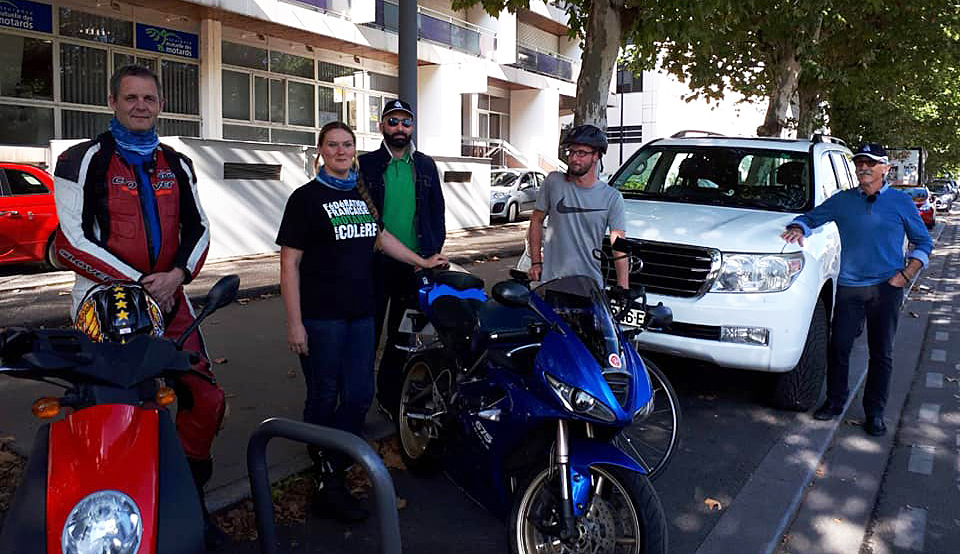 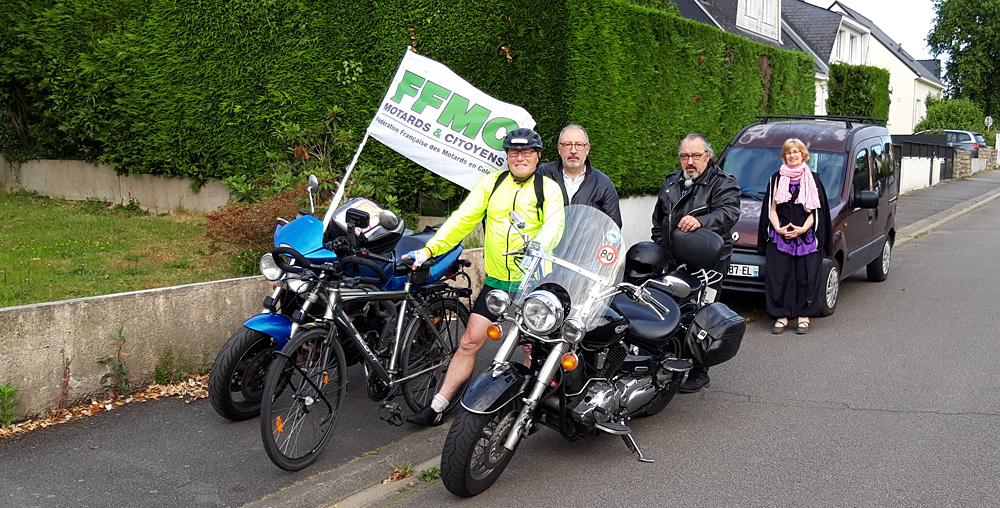 Annecy – FFMC 74 organised the mobility test in the city of Annecy. Annecy, 120,000 inhabitants, is an area in the south of Haute-Savoie. The real estate situation in Haute-Savoie is difficult: because of historic, geografic, financial reasons, but also the proximity of Switzerland (Geneva) and border work contribute to this low density of housing. So home-work trips are a major issue in Haute-Savoie.

Vaucluse – The sun is shining this morning on Tuesday, May the 14th 2019, though the temperature is very low for the season and a strong wind is blowing. Answering a call by FEMA, several members of the FFMC 84 (a local branch of FFMC in southern France) and some of their friends from “Roulons à vélo” (an association promoting the use of bicycles) meet on the Avignon Nord mall parking lot. They will leave at the same time with different means of transportations, each with its own advantages and disadvantages but always obeying the traffic rules, to go to the same place, in this case the lobby of the Henri Duffaut hospital. Another member will wait for them there and record their travel times. The objective is not to race or denigrate a means of transport, but to collect objective data to fuel the mobility issues talks, which is why these tests are organized across Europe every other year.

This year, a 12 kilometers trip was selected, between two major points of interest in the greater Avignon area, by an ordinary week morning. The traffic is quite dense at this hour but not gridlocked, rather average. At 8:30am on the dot, everybody starts: a car driver, a pedestrian taking the bus, 3 bicycle riders (including a highly trained professional user), a non-licensed motorbike rider with a 125cc, 2 riders on big motorbikes.

No big surprise, one of the motorbikes gets there first, after only a 15 minutes’ ride: a big trail with a rider who’s very used to riding in an urban environment, an efficient combo. Barely a few minutes later, at 8:49, the 125 cc shows its headlight – of course, on these city roads, power does not matter as much as handling and itinerary choice. 27 minutes after the start, the first bicycle arrives, the pro who would have been there sooner had the bike lane he chose did not lead him to a detour (he even passed his slower colleagues once back on the main road. At 31 minutes, the second bicycle and the last motorbike arrive together (the big road bike tried to pass through a city center which was blocked by an emergency intervention). The last bicycle and the car driver (who had to go park and finish on foot) get there nearly at the same time, at 33 and 35 minutes. Then… ah, a bus is coming… nope, our tester is not on board. Another bus… stll no tester. It’s only after one hour and twenty-two minutes that the pedestrian reaches his destination (the bus company says this trip should take an hour).

To conclude – Coherent with the results from last times and those from similar tests in many cities across Europe, these figures show that two-wheelers have a full part to play in urban mobility. The question is not to favor them over the other means of transportation, but at least to not forget them in transport policies and infrastructures: install parking spaces for them, not exclude them from special access areas, build safe and useful cycling lanes, and think about their needs when designing urban furniture and roads (for instance, the brand new Avignon tram network is not even up and running but its poorly designed infrastructure is already directly responsible for several bicycle and motorcycle accidents). As the cities face increased traffic and pollution challenges and more people need to move around, now more than ever, two-wheelers are not a problem, but a solution! 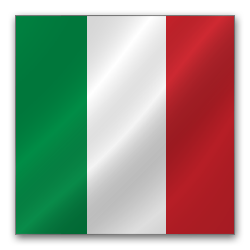 Riding a motorcycle or a scooter is the best way to go to work in Rome. It is confirmed by the mobility test held on September 2nd 2019, Friday, at 08.30h, starting from Piazzale Konrad Adenauer, located in EUR (South-Ovest side of Rome). Five FMI’s safety on the roads instructors, with a motorbike, a scooter, a bicycle, a car and the last one by public transport, started their itinerary towards the center of the city, the Italian Motorcycling Federation Headquarter, viale Tiziano 70, as a final destination.

All participants had their breakfast time at Palombini coffee bar, before facing about 15 kilometers to rich the goal. Scooter and motorbike arrived first at destination, covering the itinerary in 33 and 34 minutes: the scooter spent about 0.5 euros for fuel, while the motorbike spent 1 Euro. The driver arrived at destination in 45 minutes, spending about 2 euros for fuel and 4 euros to park the vehicle for the entire day. Scooter and motorbike parked for free. The bicycle took 47 minutes to reach viale Tiziano, in a misty itinerary partially made of cycle path (without expenses, thanks to his muscles!), and the pedestrian, thanks to her own legs, tube and tram, took 54 minutes, with an expense of 1.5 euros for the bus ticket.

Results demonstrate how it is convenient to move by powered two wheels in Rome, considering its congestioned boulevards, especially in working days. It is important to have in mind that we would have had more traffic if the test would have been executed after the opening of public schools (after September 9th). 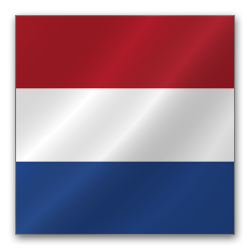 Netherlands – On 15 May 2019, five men left from an address in Hilversum for the center of Utrecht. The following modalities were represented: motorcycle, car, bicycle, speed pedelec and public transport.

It was a normal morning rush hour for Wednesday. The motorcyclist indicated that he had not seen any traffic jams. Every participant obeyed the traffic rules.

Bicycle:
• Costs: zero.
• Other: After the test, the bicycle appeared to have a flat tire. The driver went home by train. 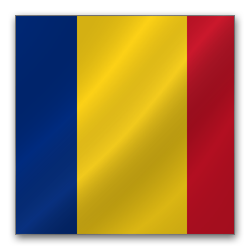 Romania – The Romanian test was done over a distance of eight kilometers in Bucharest at 10.00h on a Friday morning. 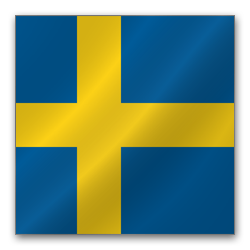 Sweden – On Monday morning 17th June five persons gathered in a parking space in Vallentuna. It is a big suburb between Stockholm and Arlanda Airport with a population of 33 000. It is a typical town where many inhabitants travel to Stockholm city to work. There are two major public transport: bus or Roslagsbanan – a small railway. The motorway E18 passes Vallentuna. The distance from Vallentuna – Stockholm city is about 30 km. Six transport modes were tested; motorcycle, car, public transport, electric bicycle, electric moped 25 km and electric moped 45 km.

The result of the mobility test in Stockholm is that the motorcycle was fastest, without any doubt. The motorcycle rider Olle chose the motorway E18 where he could go in the bus lane without getting stuck in the ques to Stockholm which started after 15 kilometers in Täby. He found a parking space close to the meeting point. Olle spent 42 minutes from start to finish. It has become much more difficult to find parking space for motorcycles and 45-mopeds since the test two years ago. This is a result of the new parking strategy where parking fees have been introduced for these vehicles and loads of dedicated motorcycle parking spaces have vanished.

The electric bicycle was the second fastest transport mode. The difference in time compared to the 45-moped is due to the lack of parking space for the moped while the bicycle could park on the pavement. The moped reached the goal before the bicycle but couldn’t find a parking space.

If you look at the results there is no real difference between the car and the mopeds and bicycles. The motorist was the only one who had to pay congestion fee to enter Stockholm city, €7 for a normal day at the office. The car had to park in a parking house in Stockholm where the cost is €7 per hour.

Conclusion – The motorcycle is the fastest means of transport in Stockholm. You save about 40-60 minutes per day by choosing motorcycle instead of a car. The time to travel with electric bicycles and electric mopeds is almost the same as with a car. The test clearly shows the advantages in using PTWs for transport in cities. It also shows the advantages when motorcycles have access to bus lanes which is allowed in some streets in Stockholm. The city council recently promised to investigate this issue again. As always, SMC offers our expertise and competence to all stakeholders involved.