The Motorcycle Action Group UK oppose changes to the Highway Code and argue that the suggested rule changes will have a negative safety impact for motorcyclists..

In the United Kingdom, the Highway Code is a set of information, advice, guides and mandatory rules for road users. Its objective is to promote road safety. The Highway Code applies to all road users including pedestrians, horse riders, cyclists, motorcyclists and drivers. It gives information on road signs, road markings, vehicle markings, and road safety. It is prepared by the Department for Transport (DfT) and the Driver and Vehicle Standards Agency, and is published by The Stationery Office in electronic form and as a printed book.

On 28 July 2020 a consultation was launched seeking views on proposed changes to the Highway Code. The review is being held by the Department for Transport, to improve safety for vulnerable road users, particularly the groups of:

The main changes being proposed are:

Motorcyclists’ organization MAG UK (a member of FEMA) immediately expressed displeasure that the review claiming to be designed to improve safety for vulnerable road users clearly showed no consideration for the needs of motorcyclists. Approaches were made to the Department for Transport asking that the scope of the review be specifically extended to cover motorcyclists’ safety. The DfT refused, saying that it would be ‘inappropriate’ as the review had been triggered as part of the Government’s Walking and Cycling Investment Strategy Safety Review. 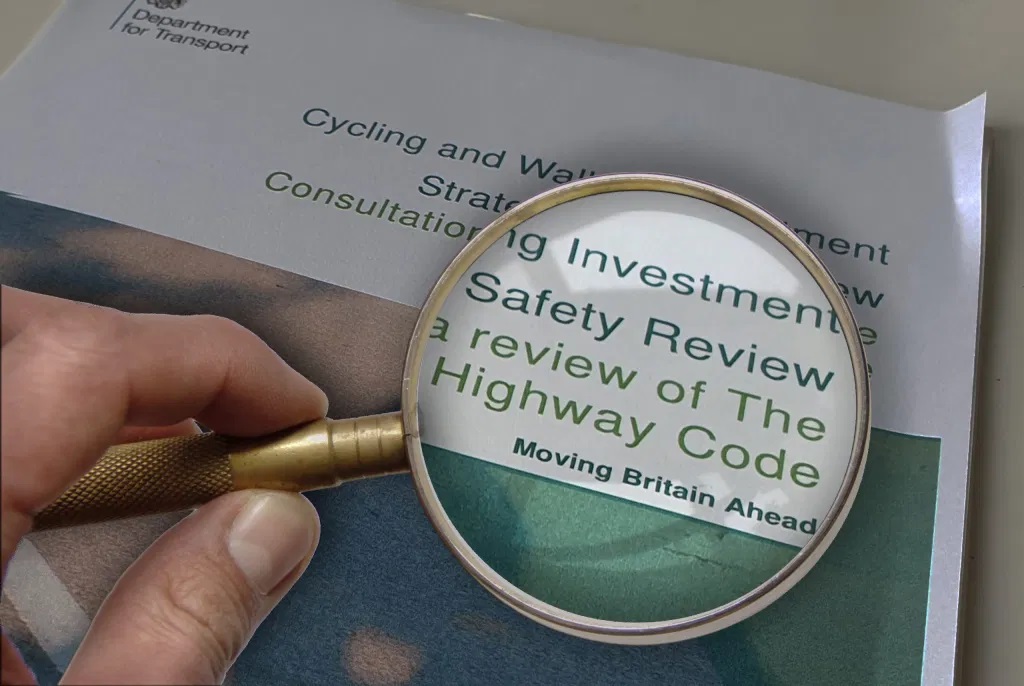 MAG UK are raising further concerns that the proposed new rules and rule changes will actively increase risks not just for motorcyclists, but for the cyclists and pedestrians that the proposals are designed to protect.

MAG campaigns for equality on the road. That equality applies to all aspects of road use, including safety and responsibility. The Government claims it believes in equality for all road users. MAG UK therefore claim that the introduction of any kind of hierarchy is by definition opposed to the principle of equality.

MAG UK argue that the Highway Code already points out that more care needs to be taken for the safety of vulnerable road users, and that the new rules simply act to apply privilege to cyclists and pedestrians that is contrary to the concept of equality. Remember the purpose of the Highway Code is to promote road safety. The objective of the code is not to promote active travel.

MAG UK have long raised concerns that segregation of road space to protect cyclists is in many situations creating greater risk for motorcyclists. Like cyclists, motorcyclists are a vulnerable road user group, but are not afforded any segregated road space of their own nor allowed access to segregated space designated for cyclists. With overall road space largely being finite, this means motorcyclists are constantly squeezed into narrow lanes with the very vehicles that cyclists seek protection from. This is not equality.

The design of cycle lanes in the UK are often fundamentally flawed and introduce increased potential for conflict at junctions. No logical road planner would expect a left turning vehicle to cut across a lane of traffic travelling straight ahead. (In the UK vehicles drive on the left, so this would be equivalent to turning right in countries where vehicles drive on the right). Despite this cycle lanes deliberately introduce this poor road layout. Turning vehicles are required to cut across the lane of cyclists travelling straight ahead. Cyclists are thus deliberately placed in the car’s blind spot.

MAG UK argue that motorcyclists are trained and encouraged to ride defensively – to anticipate hazards such as cars cutting across their path. The new rules, however undermine this key safety message by reinforcing a dangerous tendency to argue right of way. Usually arguing right of way as a vulnerable road user results in a trip to hospital.

MAG UK are not opposed to improving the safety of any road user, but argue that the rule changes will have a negative safety impact. This cannot be justified simply to encourage the uptake of active travel.

MAG UK are calling for the proposals to be dropped and a new approach to be developed that considers appropriate road behaviours by all, but also seeks to mitigate not reinforce the risks introduced by questionable road layout designs.