Skip to content
You are here
Home > Blogs > LEZ’s: you can’t just ride your motorcycle wherever you like

All over Europe we see low emission zones (LEZ’s) emerging. FEMA’s Dolf Willigers looks into the issue from a motorcyclists’ point of view.

Low emission zones, not to be confused with congestion zones where you have to pay a toll to enter a city, are popping up all over Europe to enhance the local air quality. Usually not because it is a hobby of the local authorities, but because it is a necessity. The Clean Air Directive (Directive 2008/50/EU) describes in detail how the air pollution in the European Union should be reduced; an important role is granted to the urban agglomerations with more than 250,000 inhabitants.

Long-term violations should lead to sanctions imposed by national governments, which gives the local authorities a direct financial interest in reducing the emission of hazardous substances, particulate matter and greenhouse gases. Add to this the fact that 50% of the European population lives in such urban agglomerations, that urban transport is responsible for 40% of all carbon dioxide (CO2) emissions and 70% of other pollutants in transport, and you can guess where city councils look like first when values of pollutants become too high.

Initially, the main focus was on carbon dioxide emissions. Carbon dioxide is not a toxic substance, but is generally assumed to contribute to the climate change. Reducing such greenhouse gases has been seen as the first priority for a long time. This is why you see with the first environmental zones, that reducing CO2 emissions was the criterion for avoiding the most polluting means of transport from mostly relatively small areas. In the meanwhile, the public health hazards of particulate matter and hazardous substances as nitrogen dioxide and ground-level ozone have become known better and attention became more focussed on these kind of emissions. Which makes sense, because these substances form a direct health hazard, especially at high concentrations. Although, in a 2011 study by the authoritative Fraunhofer-Institut für Verkehrs- und Infrastruktursysteme IVI (Fraunhofer Institute for Transportation and Infrastructure Systems IVI), the effect of environmental zones on the NOx level is seriously questioned. With greenhouse gases, the danger is higher in the long run and it does not actually matter where they are expelled. Reducing CO2 emissions in cities does not lead to a reduction, but to a displacement of emissions. At the same time, we also see that environmental zones are getting bigger, first of all in the inner cities. We now see that, for example, in Paris, London and Antwerp nearly the whole city is an environmental zone or is being transformed into one.

In addition to the CO2 emissions, other substances have become important and we see that not only the age of the vehicle but also the fuel consumed by the engine will play a bigger role. For example, since 1 February 2017 the emission zone in Antwerp is not accessible for diesel vehicles before Euro 3 (1/1/2006) without carbon black filter, or in some cases only when you pay for it; other cars will be banned at a later date. We see similar developments in Germany and Scandinavia. With a number of exceptions in France, Italy and the United Kingdom (London) motorcycles are kept out of the restrictions everywhere. Motorcycles are usually excluded from congestion charges as well. But, some cities and even countries already have announced that in future only electric vehicles will be admitted. Examples are Paris, Madrid, Athena and Norway that will only admit electric cars from 2025. The big question of course is whether motorcycles with an internal combustion engine will be admitted where cars with an internal combustion engine are banned, even if the development of electric motorcycles is much slower than that of cars and the lack of range is a problem that is much harder to solve. 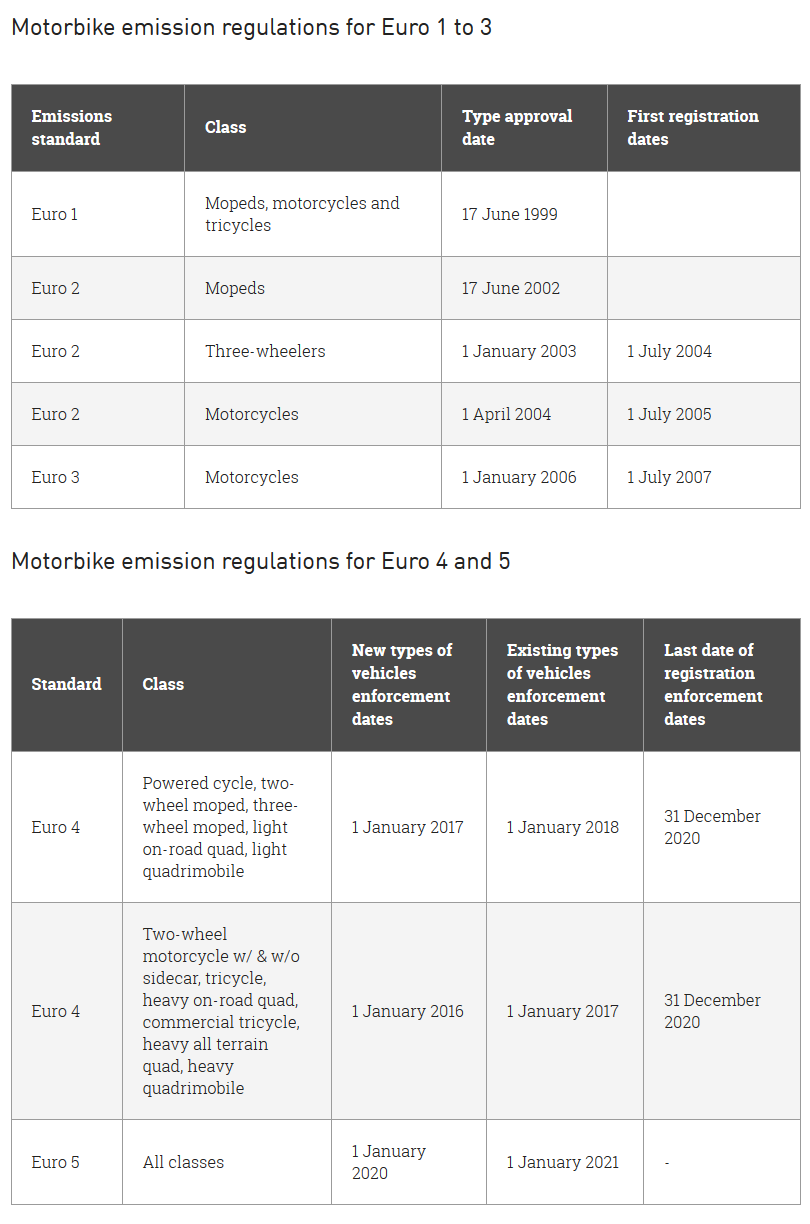 As mentioned above, you cannot just ride your motorcycle wherever you like. Here are some countries with (future) restrictions for motorcycles:

In Italy, motorcycles and mopeds with two-stroke engines are banned in many towns. Italy has more than 200 towns with restrictions. Electric vehicles are favoured: with an electric vehicle you can drive in at any time and for free in many cities with a LEZ. Rome deserves a separate mention: here are also restrictions to other than two-stroke motorcycles and there is a ban on all mopeds and motorcycles that do not have a periodical technical inspection at least once a year. As the remaining restrictions vary by period and time of day and part of Rome, I recommend that when you plan to visit Rome you better have a look at urbanaccessregulations.eu.

In France, the biggest change has occurred with the introduction of the Crit’Air sticker, which is used in the whole country to regulate access in low emission zones (Zones à Circulation Restreinte, ZCRs) and emergency low emission zones, where traffic is temporary restricted when air pollution is getting too high. Since 1 January 2017, motorized vehicles are restricted in Paris on weekdays from 08.00h to 20.00h. As of July 2017, it has been tightened again. If you want to enter Paris during daytime, you will need to have a Crit’Air sticker 4 and your motorcycle must have first been registered after 1 June 2000. Please note: this is valid for now. As of 2018, other rules will apply, as access to the city is continually restricted, both in access time and in terms of criteria. From 2020 you can no longer enter Paris with a motorcycle older than Euro 4 (1/1/2016 for new types and 1/1/2017 for existing types), possibly not even at night and at weekends. Crit’Air stickers you buy best from the French government. There are also private providers, but those calculate considerably higher costs. Next to Paris also Grenoble has a low emission zone. In Grenoble, a ban on old diesel commercial vehicles has been in place since April 2017, and it is expected that the measure will be expanded from 2020. Introducing similar access measures in other French cities is still thought about or worked on. Later this year, Lille and Strasbourg will also introduce permanent low emission zones. Some cities also have an emergency low emission zone, where temporary measures can be taken when emissions limits are exceeded.

Then we come to the United Kingdom, more specifically London. In addition to a number of low emission zones with access restrictions, London also has a toll system for two areas. In future also a ULEZ, an ultra-low emission zone. We limit ourselves to the generic rules, which sometimes include motorcycles. To start with the Congestion Charging Scheme which was introduced in 2003. This applies to almost all vehicles, but some, among which motorcycles, are excluded from this. Also, the Emissions Surcharge (the additional charge on exhaust emissions), which will apply from 23 October 2017 to 7 April 2019, does not include motorcycles. So far the good news. The bad news is that the ULEZ will be introduced in the City of London on 8 April 2019 and that motorcycles will be affected. For motorcycles that do not meet Euro 3 or higher, a toll of £ 12.50 will be charged (approximately € 16). Outside London  further low emission zones are expected in the UK. The Scottish cities of Glasgow and Edinburgh are likely to have schemes from 2018. Other cities in England and then Wales are likely to follow.

Then there is another kind of access restrictions, especially in Germany. The problem here is not the exhaust emissions, but the noise, which causes both roads, villages and cities to be closed for motorcycles at certain times, days or even permanently. The ordinary environmental zones (Umweltzonen) are freely accessible for motorcycles.

Frrom various countries and places, we receive messages that so-called car-free areas are implemented. This involves both new and expanding existing areas. These areas would then be reserved for pedestrians, bicycles and public transport. Although there is no talking about motorcycles, it is expected that they too will not be able to access these areas. Examples are Brussels (already realized), Oslo (2019). Madrid (May 2019), Hamburg, Athens (long term). Copenhagen already has the largest pedestrian zone in Europe (with Brussels in second place).

Conclusion: besides a few exceptions (London, Paris), city councils seem to have listened to our arguments to keep motorcycles out of the restrictive measures.

As often said, compared to cars, motorcycles consume less fuel, they emit less hazardous substances and because of their size, they do not cause road congestions and parking problems, they are not stuck in traffic jams or driving around in search of a parking space. And when they find a parking space they need less space than cars. In short, motorcycles are part of the solution and not the problem. Where restrictive measures are imposed, these are often aimed at motorcycles or mopeds with two-stroke engines that emit very toxic or harmful substances (especially carbon monoxide as a result of incomplete combustion).

Next to this we see an enormous variety in measures with for example different environment stickers (vignettes) in the different countries. Before you know it your whole windscreen, if you have one, will be full of stickers and other trash. The fact that the various cities all follow their own policy is perhaps understandable, but why not use uniform criteria and a European sticker to indicate in what environmental class your vehicle is? That shouldn’t be too hard to do?

Not including motorcycles in the limiting measures in the vast majority of European cities is a success in our ongoing struggle to have motorcycles and other powered two-wheelers recognised as an alternative for the car in the continuing need for personal motorized transport and we will certainly continue with that. We also will keep fighting for admission of motorcycles with an internal combustion engine in cities where not-electric vehicles are banned.

'The implementation of a technical inspection is ineffective in reducing accidents'. https://t.co/DU9Bmzy1Tv

French insurer: motorcycle accidents are not caused by technical failures. Out of more than 18,000 insurance claims studied, less than 0.4% of motorcycles were reported as dangerous by the insurance experts. Read the full article > https://t.co/04p2ZbdLwk https://t.co/izUMgMBlRE

Barcelona: dump your bike and get a free bus pass. Spanish motorcyclists’ organisation ANM does not support the proposal to scrap bikes: ‘Motorcycles are not the problem, they are part of the solution for urban mobility issues’. Read the full article > https://t.co/zjK1iB5DxQ https://t.co/Dl7V1gidk2