German motorcyclists will stand up against road closures for motorcycles by organising a demonstration in the Feldberg area on Saturday 14 May 2022.

With horror, disappointment and annoyance, the motorcycle associations in the German region of Hochtaunus have had to take note of more planned ‘temporary’ road closures exclusively for motorcycles in the Feldberg area (click here for a previous article on this subject).

The motorcyclists’ response will be a large demonstration on Saturday May 14th. The demonstration starts around 11.30h at the district office of the Hochtaunus district, Ludwig-Erhard-Anlage 1-5, 61352 Bad Homburg vor der Höhe. From there a motorbike parade will ride to the Sandplacken/Feldberg.

The motorcyclists are demonstrating against the motorcycle bans for several reasons:

Testing until the result fits
The temporary closure of the route in 2022 (every second weekend of the month, from April up to and including October) is dubbed a ‘test’ by the district council. This is now the second (alleged) test of a route closure only for motorcycles after a test closure that had already been carried out in 2019. In his press release of 26 March 2019, the District Administrator, Ulrich Krebs had promised (quote): “The test blocking is open-ended… We will sit down with everyone involved and look at and evaluate the findings from the data collected in May and September (2019).” To date, however, this promise has not been kept. There was no open, transparent discussion of the results with the motorcycle associations. This creates the impression that the authorities will keep ‘testing’ until they get the result they want.

Motorcyclists’ solutions are consistently ignored
The German motorcyclists’ organisation (and FEMA member) BVDM wrote to the district administrator and the mayors of Schmitten and Oberursel, as well as all parties in the district council in March 2021 (before the start of the motorcycle season) and proposed constructive, effective measures to solve the problem and asked for a meeting. Politicians never complied with this request. The letter was never answered. Therefore, the motorcyclists interpret the current regulation as an ‘authoritarian’ affront. There is no attempt to engage motorcyclists and citizens in problem solving.

Breach of word by local politicians 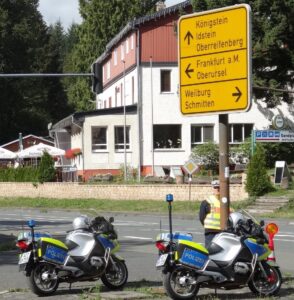 The district administrator’s road closure is obviously supported by the mayor of the municipality of Schmitten (Julia Krügers, CDU) and the first city councilor of the city of Oberursel (Christof Fink, Bündnis 90-Die Grünen). In the 2021 local election campaign, both politicians had promised the motorcycle associations in writing that route closures would only be considered as a ‘last resort’ if other measures were proven to be ineffective. Milder, alternative measures (which the motorcycle associations had even submitted in writing) were not and are not carried out or tested in a verifiable manner. This breach of word by the politicians also outraged the German motorcyclists. On behalf of the district association of the CDU (Christian Democratic Union) in the Hochtaunuskreis, on 18 ​​June 2020 Markus Koob (district chairman of the CDU in the Hochtaunuskreis, member of the district parliamentary group and member of the Bundestag, the national parliament) made the following statement (quote): “… However, I do not think blanket driving bans on Sundays and public holidays for all motorcyclists are appropriate. These are the days when motorcyclists can primarily pursue their hobby and of course also have the right to be allowed to do their tours with legally purchased machines.”

The vast majority of motorcyclists have a great deal of understanding for the problems of noise-plagued residents caused by the illegal behavior of some motorcyclists. That is why the BVDM is not committed to a so-called ‘temporary noise break’ as a solution to the problem, but to a permanent and sustainable reduction in noise emissions.

Several motorcycle associations are working together for the demonstration on May 14th. For the latest information about the demnostration, go to the BVDM website.