In 2022 Norwegian motorcyclists’ organisation NMCU celebrates its 50th anniversary. Chairman Odd Terje Døvik takes a look at the past, present and future of NMCU.

Odd Terje Døvik: “If we go back 50 years. The Norwegian Motorcycle Union, NMCU, was a quite different organisation than the one we see today, but NMCU’s ’DNA’ and purpose are still the same – the work for motorcyclists’ rights, safety and unity. The changes are many and affect both the membership and the forms of work – as working life and society in general have changed in the same period. The communication channels are radically different now and the administrative work cannot be compared. Automation and digital solutions have replaced previous manual processes. This means that the organization also has other needs than before, not least in terms of the competence of the employees.” 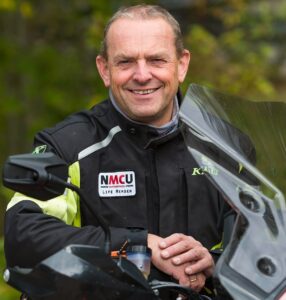 Do Norwegian motorcyclists need more victories?
Odd Terje: “In recent years, NMCU has been able to achieve many victories on behalf of Norwegian motorcyclists. We stopped proposals for cubic and hp restrictions, we got rid of the wire railings, we have so far avoided EU control on motorcycles, we have taken many steps towards a fairer tax system, we have helped to develop what is perhaps the world’s best rider training for motorcyclists. And much more. What is not as well-known is all the ‘quiet diplomacy’ that has been exercised, where good solutions have been achieved and many bad ones averted. Such work seldom leads to the big headlines but is no less important.”

We are not at the finish line
“In the new ‘National action plan for road safety on the road’, the chapter on motorcycles and mopeds has received more attention. Here, the various actors, the authorities, the industry and the motorcyclists’ organisations, have been challenged on binding measures. We have come a long way but are not at the finish line at all. It remains to be seen how the various actors will fulfil their obligations in the time ahead. Norwegian motorcyclists are good at taking care of their own safety. We dress properly, we make sure our bike is in good condition, we practice and develop our skills. But if it does go wrong, we know that the difference between a small accident and a fatal accident is very small. It’s often just about what you hit; whether it is a pole or a resilient lower rail, whether it is a protruding rock or an open meadow. We still have to work on this. The positive thing is that the road authorities in the plan are in fact obliged to create a cooperation forum for motorcycle safety, which is a good starting point for further work.”

The next 50 years
“NMCU and the motorcyclists cannot take it easy, not now, not for the next 50 or 100 years. There are perhaps greater challenges ahead of us than those we have left behind,” says Odd Terje, and continues: “Technology development contributes to increased safety for all road users, including motorcyclists. ABS and traction control are good examples of this. But there is also new technology that can pose a safety risk to motorcyclists. For example, the solutions that enable communication between vehicles and between vehicles and road infrastructure. What about vehicles that are not connected, such as older motorcycles or for that matter older cars? As a road user, do you want to be sluggish and rely on technology with the effect that unconnected vehicles are overlooked? And what about ethical choices that technology should make? Will the ‘electronic brain’ of a car choose to drive down a motorcycle if an oncoming bus is the other option? By car, active override of the gas is already a measure to restore control. On motorcycles, on the other hand, gas control is crucial for safe traffic.”

Fossil fuel versus batteries
Odd Terje: “NMCU sees that electric motorcycles will eventually become normal. Unlike electric cars, however, electric bicycles are not yet good alternatives to fossil-powered ones. Technology development has simply not come far enough. Odd Terje elaborates: “That this is the way it goes, there is no doubt. But we cannot accept a ban on the sale of new fossil-powered bicycles until the batteries have become lighter, the electric motors even more efficient and the range longer. In addition, the fast-charging capacity must be radically expanded.”

Road closures
“Closing road sections for motorcycles is a growing phenomenon in Europe. Until now, the roadblocks have most often been justified for safety reasons, but we now see that it is increasingly also linked to noise problems. In Austria, they have gone so far as to introduce stricter requirements for noise than what is required to have the bicycle type approved. This means that bikes with completely original exhaust systems will be refused to continue riding. Fortunately, we do not have this problem in Norway – yet. But what for us can be good sound, is perceived by others as noise pollution, and the irritation that follows can quickly affect anyone who drives on two wheels. What is perhaps most provocative down on the continent is the discrimination of motorcyclists on the grounds of noise. ‘Noisy’ bikes are not allowed to ride, but it is free for the Lamborghini and Ferrari people.”

The joy of riding
“For 50 years, NMCU has contributed to the relationship between motorcyclists, the authorities and the public in general. This is characterized by factual and professionally grounded discussions and the fact that accident rates are historically low, while more and more people discover the joy and usefulness of riding a motorcycle. NMCU will do its part to ensure that this development can continue. That’s what we are here for!”