Even though after the summer break most restrictions of the Covid19-measures were lifted, it soon became clear that there would be no return to the pre-pandemic normality. This did not stop us continuing our work. The number of visits to Brussels may be less than we were used to before 2020, we are still able to advocate the rights and interests of the European motorcyclists in Brussels and to a lesser extend in Geneva.

In this review we will first give a summary and then you will find the more detailed actions, ordered in the way of our strategic plan 2016-2026 by the four main topics.

Summary of actions
On the topic of environment and energy transition, part of the Fit for 55 package of the European Commission, we soon realized that in the European Union there is no political support at all for motorcycles, or other vehicles, on fossil fuels. We therefore choose to lobby for internal combustion engines for longer distance motorcycles in general. In practice, this means motorcycles running on e-fuels and biofuels. This is still an ongoing discussion, but with cars and vans, the door to these fuels is still a little open, so why not for motorcycles. Electric motorcycles can be a very good option for many users, but they need to be well facilitated with suitable charging opportunities. We lobbied to have small (L-category) vehicles included in the Alternative Fuel Infrastructure Regulation (AFIR).

After the hype of automated vehicles, it now seems that manufacturers are focussing more on advanced driver assist systems (ADAS) and partially automated and connected driving. We contacted Euro NCAP about the relation between these systems and motorcyclists, because many ADAS still do not react properly to motorcycles and other powered two-wheelers. From 2023 ADAS will be tested by Euro NCAP with motorcycles and FEMA will be involved in the development of the tests of Advanced Rider Assist Systems (ARAS). Other road safety aspects like safe infrastructure and driving licences have also taken much of our time this year as you can see later.

Our privacy and the protection of our vehicle data (and therefore also our personal data) is still a growing issue of concern. We keep following the developments and act when and where appropriate.

To be able to better look after the interests of our UK stakeholders and limit unwanted consequences of Brexit for both the UK and continental riders, we intensified our cooperation with the UK National Motorcyclists Council (NMC).

Finally, many motorcyclists own a historic motorcycle, often without realizing that. We looked after their interests too in 2022 and will keep doing that.

Environment and energy
As mentioned, the energy transition played an important role in 2022. Because in the EU plans motorcycles are still not mentioned, we could not do much in political lobbying, but we keep asking attention for the alternatives like e-fuels to be able to keep buying and riding new motorcycles with an internal combustion engine after 2035. For motorcyclists who prefer electric motorcycles, we lobbied to include powered two-wheelers in the Alternative Fuel Infrastructure Regulation (AFIR). We succeeded in that. Unfortunately there is no attention for the specific safety and security aspects of motorcycles in the AFIR, but here we kept lobbying to include these aspects in the charging infrastructure.

Sound did not play a big role in 2022, but on several occasions, we kept reminding the co-legislators that lowering the sound limit for new motorcycles is not the solution for the serious problem of noise annoyance. This solution must be found in a change in the culture of a part of the motorcycle community and enforcement.

The End-of-Life for Vehicles Directive kept us busy again too. On 24 and 25 March 2022 we attended a stakeholder meeting that was organised in order of the European Commission, and we lobbied again to keep motorcycles out of the scope of the End-of-Life for Vehicles Directive as this limits motorcycle owners to keep their motorcycles on the road in an affordable, sustainable and a responsible way. It would also limit owners of historic motorcycles to keep them running.

We took part in the UNECE Informal Working Group on Safer and Cleaner Used and New Vehicles for Developing Countries. (IWG on SCUNV), part of UNECE WP.29. The purpose of this working group is to regulate the export of used vehicles (including motorcycles) from Europe to other continents in a way that only clean and safe vehicles will be exported. We participate in this because we consider it as our duty to avoid the export of dirty and unsafe motorcycles to other continents.

We contributed to several surveys on this topic. We also keep alerting policymakers and the public on the beneficial aspects of using a motorcycle also in urban areas.

Road safety
As in previous years, in 2022 we had several contacts with the European Commission about the driving licence regulation. In March, FEMA’s General Secretary Dolf Willigers was a speaker in a workshop about driving licences, organised by the European Commission. We keep telling all policymakers that the current staged access system has no benefits and only heightens the threshold to obtain a full A driving licence. We also asked for further harmonization of the driving licence regulation on aspects as riding a small motorcycle with an A licence and riding with a trailer. Together with ACEM we are also looking in ways to better include electric motorcycles as test motorcycles in the directive. Finally, we kept telling all policymakers that the focus of the tests needs to be changed from low-speed technical skills to higher level cognitive skills.

The European Commission is preparing a change of the current PTI directive 2014/45/EU to include all powered two-and three-wheelers in all member states. We provided the Commission during and after a meeting with the head and an expert of the cabinet of transport commissioner Vălean with information that proves that periodic technical inspections have only a negligible effect on road safety, contrary to other measures like better education, safe infrastructure, etcetera.

During several meetings, we were active again in the road safety project SAFE-UP to make cars safer for vulnerable road users as PTW-riders.

By participating in a survey and several meetings we contributed again at efforts to develop an e-Call system that is good and safe for motorcyclists. We are convinced that well developed e-Call system has a positive effect on diminishing the effects of incidents like crashes on motorcyclists, because emergency services can be quicker and better alerted and crashed motorcyclists can be better found after the incident.

Early 2022 and again on 14 September, we had meetings about the technical and legal requirements and type approval of Personal Light Electric Vehicles (PLEVs). Important for us as this can become within our scope in future, but also to avoid confusing incident figures of this kind of vehicles with those of motorcycles.

Together with our Swedish member organisation SMC and several road safety experts we are participating in an IRAP-EuroRAP working group to develop recommendations for safer infrastructure and enhance the IRAP assessment system.

We initiated a revision of the Dutch lane splitting guideline, which is used as an example is several other countries, to include the emergency lane.

We contacted Euro NCAP to share our concerns regarding the way safety assist systems are tested, which in our view can give drivers a false sense of safety that can be dangerous for motorcyclists. Euro NCAP will have better tests form 2023 and also invited us to participate in the development of tests for Advanced Rider Assist Systems (ARAS) for motorcyclists.

Intelligent Transport Systems (ITS)
Again in 2023 we were alert to developments that endanger the privacy of motorcyclists. For the time being this is a problem that mainly plays a role with cars, but in our view it is just a matter of time before motorcycles are going to be “connected” and this can become an issue for us too. In April, we contributed to a public consultation on this topic.

We also kept an eye on ARAS for motorcycles and follow the lobby to make Intelligent speed assistance (ISA) mandatory for motorcycles, as it already is for new cars.

Other issues
Historic vehicles are keeping our attention. We did so by participating in the European Parliament Historic Vehicle Group, in our work on the End-of-Life for Vehicles Directive (ELV Directive), lobbying is several ways to keep riding a motorcycle with an internal combustion engine possible, in discussing historic vehicles with the European Commission and with, through a survey, developing a new definition of historic motorcycles that better meets the needs of motorcyclists.

The mobility between the UK and the EU still provides problems for those who do not ride their motorcycle themselves, but have it transported in a van or on a trailer. Together with the UK NMC we tried to get some clarification in this topic. In the end we think that we can give that now.

Early 2022, we published a revised set of the FIM-FEMA Joint Position Papers, that we presented together with FIM Europe during the IfZ 14th International Motorcycle Conference in Cologne early October. Next time the set of joint position papers will be from FEMA, FIM Europe, and NMC.

In December, FEMA was a guest in an American podcast. This was after we published an article about transport poverty and how motorcycles can keep people mobile with raising costs of cars and public transport. It turns out that our articles are read widely all over the world.

In the end of the year, we were confronted with a situation where a Dutch motorcyclist received a ticket from Uzbekistan for an alleged violation of ULEZ rules in London. We wondered how his personal information could be known by a private company in Uzbekistan and asked for Information about this from the Netherlands Vehicle Authority which is responsible for the Dutch vehicle registration databank. This is still pending. 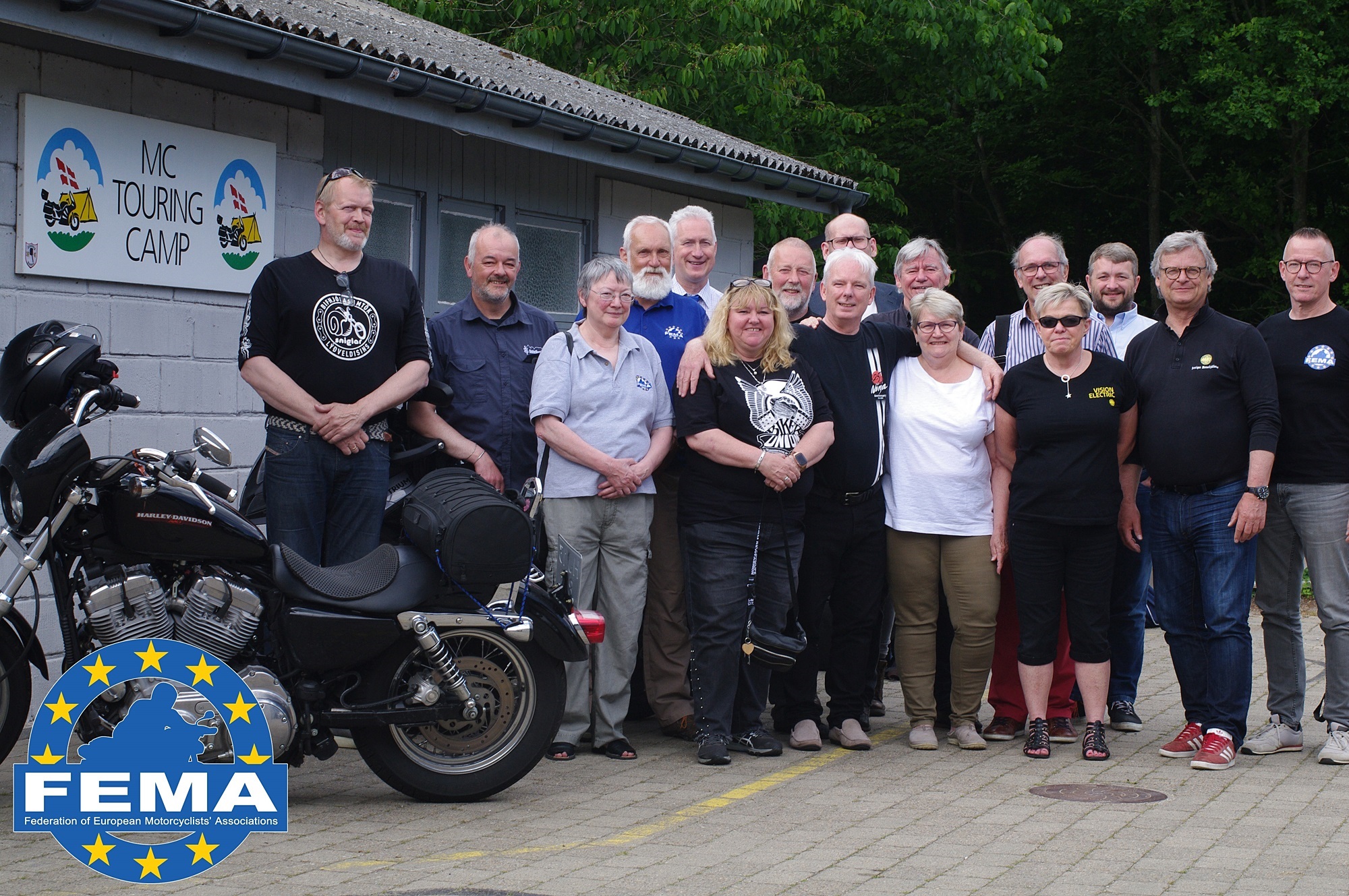 FEMA’s Committe Meeting in Denmark
For the first time since the pandemic, FEMA was able to organise a real meeting for the member organisations, our first physical meeting since February 2020. The meeting was hosted by our member organisation MCTC at the MC Touring Camp in Kolind, Denmark.