New crash avoidance testing of automated cars will include motorcycles. Euro NCAP is also looking at ways to assess the safety of motorcycles.

In September 2022, we published an article about the very high Euro NCAP star rating for the Tesla model Y, while accidents with Tesla’s in the USA have showed that the Autopilot system is far from failproof, especially in bad-weather conditions. This led to several meetings with Euro NCAP, more about that later.

In the meantime, on 9 November 2022, Euro NCAP published its new Vision 2030: a Safer Future for Mobility. In this paper Euro NCAP describes on a high level how it sees future vehicle safety standards and testing. Euro NCAP plans, for example, to add testing and assessment of assisted and automated driver support systems, look at driver distraction, examine HMI (Human Machine Interaction) design, testing and assessment of safety functions enabled by V2V (vehicle to vehicle), V2I (vehicle to infrastructure) and V2X (vehicle to everything) communication, evaluation of fire risk and thermal runaway in electric vehicles. It also is setting its sights on new programmes that will assess the safety of motorcycles and other powered two wheelers as well as light and heavy goods vehicles, seeking to address the overrepresentation of these vehicles in road fatalities and serious injuries. 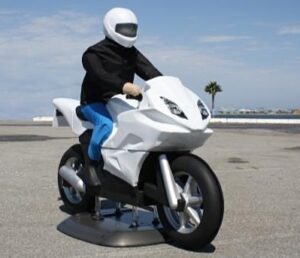 Motorcycles and other powered two-wheelers (PTWs) play an important role in the new vision. Let’s have a look at what the paper says about PTWs:

The vision paper concludes that including motorcycle safety is an appealing prospect but also a challenge. It means changing UN Regulation 78, possibly set up a programme of aftermarket testing for Personal Protection Equipment an increase of tests (in fact more than is possible).

We consider this as good news. The paper provides an answer to the concerns we have expressed earlier. Including more scenarios with PTWs in the tests, taking into account less than perfect weather circumstances, giving attention to Advanced Rider Assistance Systems (ARAS) and also looking at PPE would be a great step forward for motorcyclists’ safety. Already in 2023, a new test protocol will be used in which the needs of riders of powered two-wheelers will be taken into account: especially more test scenarios and the use of multiple sensors. The new grading system will be more demanding on sensors and will be bridging the gap to real world scenarios. A start will be made with the other issues like ARAS and PPE. FEMA has been invited to take part in these new developments.