On behalf of his family, it is with great sadness that we announce the passing of Frank Pearson (aka Fat Frank). 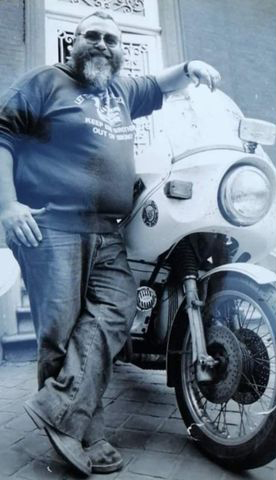 A passionate advocate for riders rights in the 80s and 90s, he was an active MAG member in Cumbria (UK), an honorary Sydenham MAG member and the first General Secretary of the Federation of European Motorcyclists (FEM) 1988-1992.

He will be fondly remembered by everyone he encountered over the years for his animated story telling, his dry humour and wit and his legendary snore! He was a hands on dad, charismatic, a loyal friend, completely selfless and a dab hand at cooking.

Frank leaves behind his three daughters Tracey, Angela and Emma, his grandchildren and great grandchildren, all of whom he talked of with great pride.

A funeral service will be held on 11am on the 15th September at Beetham Hall Crematorium, Beetham, Milnthorpe, LA7 7BQ. Light refreshments to follow the service at The Tavern, Hale, Milnthorpe, LA7 7BH. If anyone is planning to attend the service, wishes to contribute to a joint floral tribute or would like to pass on a message of condolence please contact shawh_2000@yahoo.co.uk

Wim Taal, FEMA’s Communications Officer said: “The international motorcycling community lost on of its true pioneers. Frank – whom I have had the pleasure to meet on a number of occassions – was one of those rare people who stood up for motorcyclists’ rights in Brussels and already saw the importance of international cooperation between motorcyclists’ associations when the European Union as we know it was still being formed. On behalf of FEMA’s Board and all its member organizations, I wish Frank’s family and friends the strength to overcome this loss.”