More and more national governments are planning to ban the sale of petrol-powered vehicles in the near future. The British Motorcycle Action Group (MAG UK) asked motorcyclists’ attitudes to the potential phasing out of petrol motorcycles.

MAG UK – a member of FEMA – recently ran a survey to establish a snapshot of riders’ opinions about what remains technically a potential phase-out of petrol-powered motorcycles. Motorcycles are not currently included in the UK government’s announcement of the 2030 end-to-sales of new petrol and diesel cars and vans. However, it is widely accepted that motorcycles are likely to be covered in future announcements as the country works to decarbonise transport.

The survey attracted a total of 4,805 responses. Of these, 1,575 responses were from MAG UK members. The remaining 3,230 were from non-members (click here for the full report).

The first question covered opinions on a potential phase-out of the sale of new petrol motorcycles. Just 8% of respondents accepted a potential ban, 36% would want to see a ban delayed and 55% were completely opposed. It is noted that complete opposition was higher amongst non-members than members (48% of members compared to 59% of non-members were completely opposed).

83% Percent of all respondents want to see MAG UK work with other groups opposed to the ban of petrol- and diesel-powered vehicles. 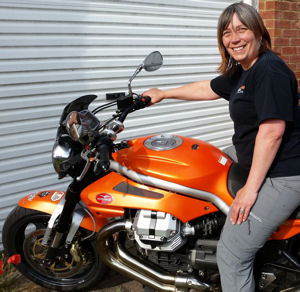 The third question probed attitudes to electric motorcycles. Asked whether they would stop riding altogether, keep existing petrol motorcycles running for as long as possible, or adopt electric before the end of any phase-out, 31% said they would hang up their crash helmets, 56% would resist the switch for as long as possible and just 13% would make the switch before it was unavoidable.

MAG UK Chair, Selina Lavender, commented: “I was delighted by the level of response to the survey and I would like to thank all those that took the time to let us know their opinions. MAG UK always represents the views of all riders, regardless of their choice of motorcycle. We have worked hard to develop the channels that get riders opinions heard by Government. We will not misrepresent those opinions.”