In Sweden motorcycle scrapyards already recycle 80-100% of each motorcycle, proving once more that stricter European recycling regulation is not necessary.

All whole parts are disassembled and sold to motorcycle customers. Parts that are not sold are recycled within the framework of current regulations for plastic, liquids and metal.

Europe has rules in place for the collection and destruction of cars that have come to the end of their life. Motorcycles are exempt from these rules. The European Commission now plans to revise the End-of-life Vehicles Directive and explores the need to have powered two-wheelers included in the scope.

, The Swedish motorcyclists’’ association (a member of FEMA) surveyed Swedish motorcycle scrapyards; the survey shows that they have been working in a sustainable way for many years. There is no reason why the End-of-Life Vehicles Directive should cover motorcycles and mopeds.

SMC contacted nine companies dealing with scrap motorcycles. Five have responded and together they handle around 700 motorcycles and 500 mopeds per year. The recycling rate of motorcycles and motorcycle parts is very high. The companies report that 80-100% of a scrapped motorcycle is reused or recycled. The sale of used parts enables motorcycle owners with small budgets to keep their vehicles roadworthy and allows older motorcycles to continue running. Rising prices for new spare parts mean that more and more people must rely on the second-hand market. As motorcycle manufacturers do not want to hold large stocks over long periods, the need for second-hand spare parts is generally increasing. They also do not produce large series of spare parts. Today, parts for 2010 model year motorcycles may be missing, says one of the companies SMC has been in contact with.

Who buys second-hand?
Three quarters of all motorcycles in use in Sweden are ten years old or older. It is mainly motorcycle owners with older motorcycles who buy used parts. When the warranty expires, many people do the servicing themselves. The high price for new parts or the lack of new parts are reasons why people choose second-hand. The need for used parts will not diminish. The SMC survey also shows that motorcycles are being scrapped rapidly in the dirt bike category and there are limited sets of parts compared to road bikes. They must rely largely on used parts. 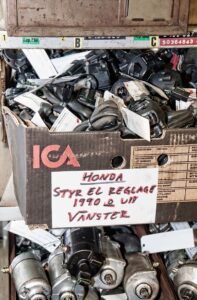 Another large category of buyers is builders, where there are two categories: those who buy new parts and those who buy second-hand parts. The Swedish Vehicle Builder’s Association, SFRO, inspects between 100-150 rebuilt and amateur-built vehicles per year before they are finally approved for the registration. SFRO sees no problem with the use of used parts, they are often of high quality. Examples of commonly used parts on amateur and rebuilt vehicles are brakes, wheels and tanks. The used parts are bought partly through scrapyards and partly on swap meets. Availability of used parts is important for builders.

Europe’s End-of-Life Vehicles Directive
In Europe, there are rules on how to collect and scrap cars. Motorcycles and mopeds are excluded from the regulation, but a review of the End-of-Life Vehicles Directive is now underway, and discussions are to include them as well. The companies contacted by SMC responded that there is no room for increased bureaucracy and administration in this area. They don’t scrap that many motorcycles and if it gets too bureaucratic, they will stop doing it altogether. Nobody believes that this is good for the motorcycle community in the long run.

FEMA is of the opinion that motorcycles and other powered two-wheelers should not be included in a new directive (click here for FEMA’s full position).

If the European Commission does propose to include motorcycles and other powered two-wheelers in an End-of-life Vehicles Directive, FEMA would ask the Commission to ensure that the possibility of controlled in-house demolition remains possible (as part of a circular economy), either by including it in the Directive, or by allowing Member States to make their own rules and regulations for in-house demolition.

Inclusion of motorcycles in the scope of the directive could mean a serious threat to historical motorcycles. These bikes are especially dependent upon on available and affordable original spare parts to keep them in working order. And who wants to see oldtimers disappear into state approved demolishing facilities?