Students at a technical college in Verona were fined for parking their motorcycles outside of the school. With 900 students, the school only had four parking spaces for motorcycles and other powered two-wheelers. 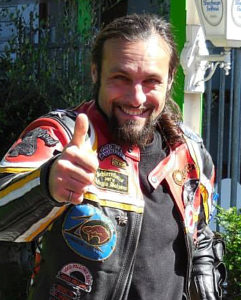 The Italian motorcyclists’ organization Comitato Coordinamento Motociclisti (CCM) found out about the fines, and CCM’s president Mauro Favazza (see picture) and one of his boardmembers went to the Municipal Police (who had issued the fine) to talk to them about the need for motorcycle parking bays.

CCM also looked for publicity in local media and they talked to the local authorities. Of course they also talked to the head of the school, who had been asking for motorcycle parking for years.

CCM established a great relationship with the director of the school and they have arranged to give lectures at the school for young motorcyclists.

Comitato Coordinamento Motociclisti is a very young organization, started in Verona, but it is quickly growing in size and in power. This is a great example of the power motorcyclists can have to change local, regional and even national policies; all we have to do as riders is unite, so join your national motorcyclists’ organization today!