Skip to content
You are here
Home > Blogs > One Europe? Not really…

The European Union is not as united as you may think. National laws and regulations can become real problems for unsuspecting motorcyclists travelling across borders.

With the end of winter in sight, many people are preparing – or at least thinking of – journeys through Europe. This is hardly an adventure these days, especially when you travel between Schengen countries. Borders sometimes are hardly visible, passports can often stay in the pocket and you don’t have to worry about demands on yourself or on your bike.  Or do you? If your bike is in the same state as you bought it (but which bike is?), you have a full A-licence and do not tow a trailer the only thing you have to worry about are different traffic rules and signs. But if this is not the case, maybe you should read further.

There are three kinds of regulation that matter when you use a motorcycle (either at home or abroad). The first is the European Community Whole Vehicle Type Approval (ECWVTA). All motorcycles and other vehicles, including trailers, that are sold in the European Union and EFTA countries must have a ECWVTA, or type approval as we commonly call it, before they are allowed on the public roads. If your bike is exactly in the same state as it was when imported to Europe or manufactured in Europe, this is no problem. However, the European Union is not as united as you may think. Any change to the original can cause problems if this modification does not comply to a national regulation on permanent requirements on motorcycles.

These permanent requirements on motorcycles relate to the general technical condition of the motorcycle, sound emissions, minimal deceleration, mirrors, lights et cetera. As the name already suggests these national regulations on permanent requirements differ from country to country. This means that modifications that are allowed in one EU member state may not be allowed in another. An example of this are the (aftermarket) xenon lights. While these cause no problems in for example the Netherlands, as long as other road users are not blinded by it, you can get into trouble with in Austria. Some years ago I received many complains of riders that had to remove the xenon lights on the spot and got a substantial fine. Be aware that modifications that are allowed in your own country may not be allowed in other countries. Another thing that differs from country to country are the demands on a trailer that is towed by a motorcycle. Trailers that are to be towed by a motorcycle are not category O1 or O2 light trailers. This means, that they are not subject to the ECWVTA (type approval). Therefore, every country has its own rules for this type of trailers. 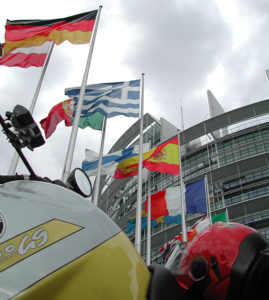 This brings us to the third kind of regulations, the ones that matter your own personal capacities and behaviour on the road. Let’s start with driving licences. Two years ago there was a bit of panic. The reason was this: during a meeting of the Driving Licence Expert Group of the European Commission a question was asked about riding abroad on a motorcycle with a trailer. It turned out that this was not regulated in the third Driving Licence Directive. The European Commission therefore concluded that while, in this case the Netherlands, government allowed riding with a trailer behind the motorcycle with an A-licence, the license did now allow riders to go abroad with a trailer and the Netherlands did not comply to European regulations. This meant that riders with trailers were riding abroad with invalid driving licences with all potential consequences for insurances and fines. Some research taught me that not only the third Driving Licence Directive did not include trailers, they had never been part of the European driving licence directives!

Following the reasoning of the European Commission motorcyclists had been riding around in Europe with trailers without a valid permit since 1983. However, if a country allows its own motorcycling inhabitants to ride with a trailer, they usually allow riders from abroad to do the same. We collected this information from the driving licence authorities, our national organisations and public sources. It showed that most European countries do allow riding with trailers, although sometimes there are limitations. For a full overview, click here. Of course this is not a good situation. We should just be able to ride in the same way all over Europe. That’s what the EU is for. For this reason, FEMA – together with the Dutch government and other organizations – will demand a modification of the third Driving Licence Directive with the coming review.

There is more to say about driving licences. In some countries you are, under circumstances, allowed to ride a small motorcycle (less than 125 cc displacement) with a B-licence. This is to my knowledge the case in Spain, Greece, Malta and Germany (with diving licences from before 1984). Some countries allow motorcycles with a displacement of less than 125 on the motorways, others don’t.

Next to the driving licences there are more regulations which relate to your personal capacities and behaviour: the amount of alcohol you are allowed to drink, traffic regulations concerning speed, overtaking, filtering, use of headlights and so on. Information about these rules you can often find on websites from the countries of destination or of the motoring club in your own country. FEMA published this information as well in the past and we will do so again in future. One Europe? Not really.