France has announced a new experiment with ‘noise cameras’ to tackle excessive noise from moving vehicles.

The experiment is aimed at testing the technological possibilities and will also need to set the legal framework necessary to use noise cameras as a legal way to ‘punish’ excessive noise.

On 3 January 2022 the French government published a decree, allowing a two-year experiment with the recording of noise emission levels of moving vehicles by fixed and mobile automatic control devices. The decree also ‘adapts the regulatory part of the highway code in order to specify the constituent elements of an infringement of the regulations on the emission of noise by a moving motor vehicle and to allow its detection by an automatic control device. It sets out the technical and operational objectives to be achieved in order to achieve the automated processing of data from recording equipment.’

The decree explains how, on an experimental basis, for a period of two years devices for automatically controlling the level of noise emissions of vehicles in circulation may be installed on the territory of the municipalities of Bron, Paris, Rueil-Malmaison, Villeneuve-Le-Roi, those belonging to the community of communes of the Haute Vallée de Chevreuse, of the metropolis of Nice and the metropolis of Toulouse. The measuring devices will be installed on roads within built-up areas where the maximum speed does not exceed 50 km/h.

The decree authorizes the installation on public roads of non-approved devices for automatic control of the noise emission level of vehicles, in order to carry out tests with a view to seek approval of the measuring instruments. These control devices, capable of attributing to a motor vehicle the noise emitted during its passage in front of the apparatus, will have to meet the legal conditions already laid down in French law. On roads where the measuring devices are tested, there will be signs with information about the experiment.

It is not an easy task to measure sound; sound is not like speed, which is technically quite simple to measure. When measuring the sound of an individual motorcycle, there are precise rules in place, with fixed distances and angles between the exhaust pipe(s) of the vehicle and the microphone, away from buildings and other objects that can reflect the sound. And let’s not forget that the measuring devices have to be able to specify which vehicle is ‘breaking the law’; is it your bike or is it the car or truck travelling on the same road?

Have the authorities determined the exact limit of ‘acceptable noise’? So far there is no clear answer.

The deployment of these ‘acoustic cameras’ is said to be about the level of noise emission that the authorities find acceptable for public roads, rather than checking the exact emission level of an individual motorcycle. So, have the authorities determined the exact limit of ‘acceptable noise’? So far there is no clear answer. The decree states that the legal limit of noise emission will be ‘fixed by order of the Minister responsible for the environment, taking into account their category, the date of their first entry into service and the maximum speeds allowed on the traffic lanes.’

In 2019 research was done for the British Department for Transport to identify and recommend options for methods and equipment available for the detection and enforcement of excessively noisy road vehicles. The researchers recognized some of the issues that FEMA has also mentioned before: “An automated noise camera solution has the potential to improve enforcement by capturing sufficient data to indicate that an offence has occurred before the police act on it. However, further work is required to select threshold noise levels for different vehicle classes and speeds of travel relative to the mounting position of the noise camera system”.

The report also says: “Although noise cameras using acoustic signatures to identify excessively noisy vehicles are not fully developed, there is an opportunity to use the data collected from the noise camera trialled (…) to characterise the acoustic signatures associated with excessively noisy vehicles. This information can be used to configure or set a performance specification for a more sophisticated noise camera system in the near future when the technology is fully developed.” In other words: exact standards, a legal framework and sophisticated technology need to be in place before it is possible determine whether a vehicle is exceeding the legal noise limit and to determine which specific vehicle it concerns. 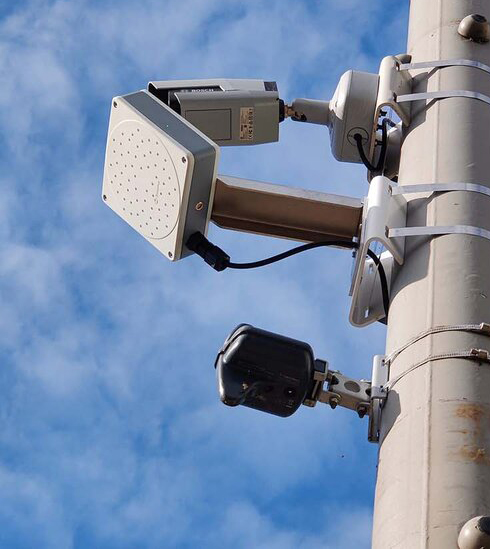 According to the French authorities, the evaluation of the experiment will include an assessment of the impact on the behaviour of road users, the deterrent nature of the presence of automatic control devices, the social acceptability of such monitoring and any decrease in noise emission levels.

The introduction of acoustic cameras is not a development we see in France only; in Belgium the city of Genk is running a pilot, where acoustic monitors were installed next to the city safety cameras. When the acoustic monitors register a sound above a certain decibel level, a trigger is generated and signals the city safety camera to start recording a video of the loud vehicle. Other cities in Europe have shown an interest in pilots like these or have announced their own trials to tackle excessive noise by vehicles (not just motorcycles). The problem for most of these local initiatives seems to be creating the legal framework that is needed.

The French motorcyclists’ organisation FFMC – a member of FEMA – recognizes the fact that excessive noise is a problem that needs to be taken seriously, but it regrets that education and information are once again being replaced by sanctions. Both FFMC and FEMA are wondering how the exact demands on the so-called Wide Open Throttle test, used to test the sound emission of a riding motorcycle, can be reproduced on the open road.