Skip to content
You are here
Home > Opinion pieces > Will electric vehicles really take over any time soon?

This summer the automotive websites suddenly exploded with articles about the fall-out of the Volkswagen diesel scandal: Daimler had a massive recall of diesel cars, cities and even countries announced that in ten to fifteen years they would only admit electric vehicles. India, with three million new vehicles every year, among which only 2,4 thousand electric cars, wants every car to be electric in 2030. To call this ambitious is an understatement.

To heighten the amount of reality even further the Indian government expect with the phasing out of internal combustion engines a reduction of their national fuel bill from € 60 billion to zero. I wonder how they are going to make and distribute all that electricity. The present power network in India needs some updating anyhow. European Commissioner Elżbieta Bieńkowska suddenly got cold feet; last summer she issued a strong warning to the car manufacturers, that they should really make a start with reducing the NOx emissions. This year summer she wrote a ‘secret’ letter to the European governments with a plea to keep the cities accessible for diesel cars. The burden on the car manufacturers shouldn’t be too big, in order to enable them to develop cleaner engines. That must have been some hell of a lobby campaign from the car industry.

This isn’t surprising if you take a look at the transparency register of the European Commission: with a quick look I found 99 registered lobbyists from the car manufacturers only, without their federation ACEA (18), without suppliers or other stakeholders. Volkswagen alone has 33 lobbyists walking around in Brussels. And now it appears that the German car industry has also formed a cartel to make price agreements and to fool the technical services (which do the type approval tests) by temporarily lowering the NOx emissions by adding Ad-blue under test circumstances. Volkswagen and Daimler (Mercedes-Benz) already started to sing like choirboys to avoid further punishments. To end this enumeration: the car makers formed one front to persuade the Chinese government to soften the plans to reduce the number of non-electric cars in China, that consists of a growing share of electric cars in sales of new cars, starting in 2018 with a goal of 25% electric cars in new sales in 2025. Does all this as look like panic to you? To me it does.

Now let’s have a look at motorcycles. The good news is that there are almost no diesel motorcycles, so we don’t have to bother with NOx emissions. The closing of cities to diesel cars doesn’t affect us. However, a completely different situation will occur when cities (or entire countries!) are closed for all cars with internal combustion engines. Will this effect only cars or motorcycles as well? Here we will have to be aware and react immediately if necessary. According to ACEM, in the first quarter of 2017 only 787 electric motorcycles were sold in the European Union (that is without Norway, Switzerland and Liechtenstein) on a total of 193.097 motorcycles. To save you doing the calculation: that is 0.4%. To be honest: in the first quarter of 2016 the share of electric motorcycles was even smaller with less than 0.3%. But still, these figures are not impressive and a close-down for all vehicles with internal combustion engines, including motorcycles, will effectively mean that motorcycles are no longer part of urban transport. So much for our claim that we are part of the solution for congestion, traffic jams, parking and pollution.

Electric motorcycles may be far away for most of us, but as we see above, motorcycles already are much more fuel economic than cars. Add to this the new Euro 4 standards and in 2020 the new Euro 5 standards for motorcycles and the future doesn’t need to be too dark. Also, power plants and electric power grids are functioning at the top of their capacity already and more power failures are predicted for the future. Expecting to have a completely electrified vehicle park in the next decennia is not realistic, unless governments and private companies invest massively in both power plants and grid. In practice we see the opposite.

This means the near future could – at least partly – still belong to the internal combustion engine and motorcycles can play a role in urban transport as the cleaner, faster and less space needing alternative to cars. It only needs some effort from the riders to buy cleaner, quieter and more fuel economic motorcycles, and we – the motorcyclists’ interest groups – need to advocate motorcycling, especially in urban transport, and inform the decision makers in a realistic way about present performances. And last but not least, the industry needs to communicate better about the gains in fuel economics and reduction of pollution, but the industry also needs to inform the potential buyer about fuel consumption and pollution to enable him to make a balanced choice. With cars this has been normal for years now, for motorcycles it isn’t and the industry really should do more about this. If we want to survive as motorcyclists and motorcycle industry, we need to do something for it. All of us. 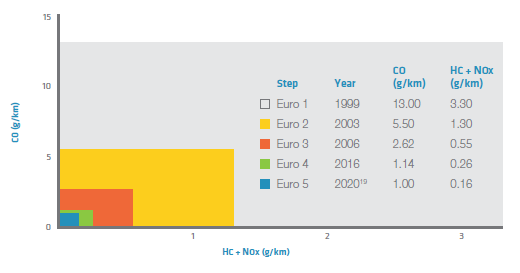