Skip to content
You are here
Home > Member news > Swedish riders: ‘ABS brakes on motorcycles are superior on gravel’

There is no better place to test the performance of motorcycles with ABS on gravel roads than Sweden. One fifth of the Swedish road network are gravel roads, that is 20,200 kilometres.

It has become popular to ride on these roads with ‘normal’ bikes, as well as riding them with motorcycles designed for these roads. Thus, it is important for SMC to test safety systems on gravel.

Swedish Motorcyclists’ Association SMC (member of FEMA) and its member magazine MC-Folket did a brake test with adventure bikes on gravel in the autumn 2020. The test showed that ABS (anti-lock braking system) always led to more controlled braking, regardless of whether the rider had experience riding a motorcycle on gravel or was a beginner. ABS brakes also led to shorter braking distances.

The tests do show large differences between the rider’s previous experience. The braking distance is almost twice as long for the beginner compared to the gravel enthusiast. The reason for this is that you don’t dare to brake due to fear of locking the wheels. This means that when the experienced rider has stopped the motorcycle from 50 km/h, the unexperienced person is still riding at 34 km/h, with the risk of colliding with the obstacle he wants to avoid. 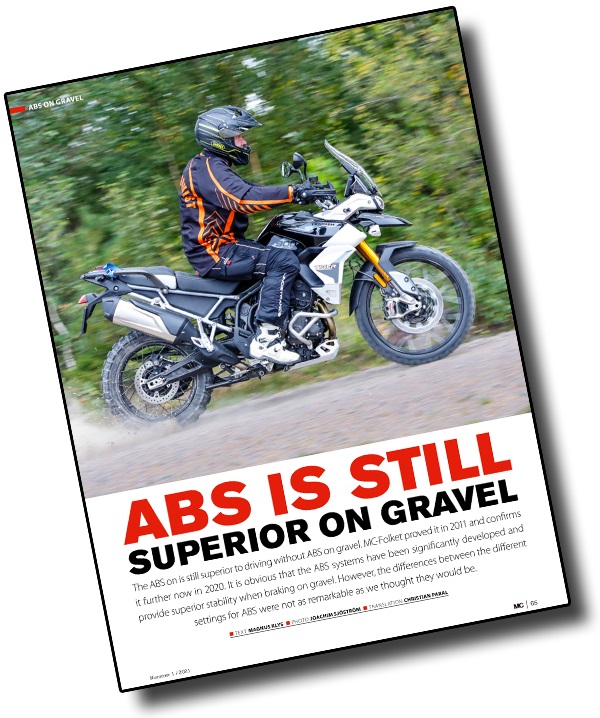 SMC and MC-Folket did the first brake test on gravel in 2011 when many thought that ABS brakes didn’t work on gravel. The test showed the opposite, the ABS brakes gave both shorter braking distances and more stable motorcycles. Since then, motorcycles and their safety systems have been developed at the same time as adventure bikes that are ridden on both asphalt and gravel have become very popular. In the test 2020, the performance was measured and compared based on the choice of tires, vehicle setting (gravel or asphalt), with or without ABS and based on the driver’s previous experience. Braking and evasive manoeuvres were performed at 50 km/h.